SWANSEA CITY’S CHARITY SWANSAID HAVE AWARDED A £2,000 GRANT TO LLANGENNECH AFC FOR THEIR INSPIRING CONTRIBUTION TO THE LOCAL COMMUNITY. 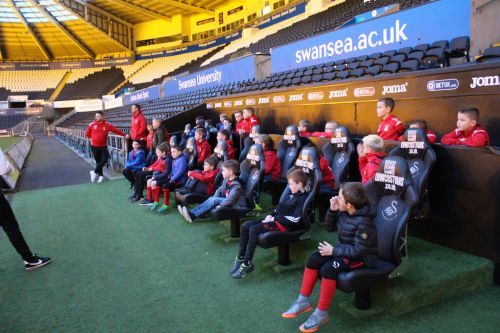 Llangennech AFC have been rewarded for their outstanding efforts in the valleys of Llangennech and Bryn. The club boast an impressive set-up, running four mini-teams, a junior team, two senior teams and a veteran’s team.

SwansAid aims to support organisations that encourage young people, or those with disabilities, to increase their physical activity.

On behalf of Llangennech AFC, Daniel Price said: “We’re delighted. We know that we faced very strong competition for this grant and we’re really pleased that the Community Trust have agreed with our feeling that we have a strong project that will have a big impact on the number of games our mini football teams will be able to play.”

With the extra funding the community club will be able to invest in a netting system to ensure the safety of the children playing on their local pitches.

“This new netting system will enclose the area from the River Mwrwg that surrounds the area designated for our under-nine team”, Price adds.

“We have limited playing facilities available to us which is why this grant is so important to us.”

Since its inception back in 2013, SwansAid has donated over £150,000 worth of grants, which have helped an array of sports teams, community projects and organisations.

“If you have a project idea that would really boost your club, SwansAid have shown us twice now that they are prepared to back local clubs where they see that there would be a real benefit from it happening," says Price.