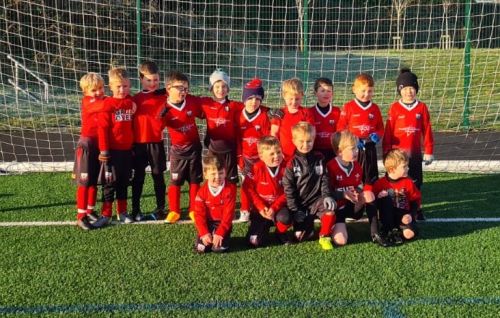 Our developing under 6's had their first ever games against opposition on Sunday or 'proper' games as one of the boys put it.

It was the coldest day of the season so far but with no risk of the games being off playing at Penrhos 4G, 16 players took to the field and thoroughly enjoyed.

Coach Dan Price added "The boys were incredibly nervous but once they took to the field, there were smiles all around and it's great to see such a good turnout for a very cold Sunday morning."

Mike O'Mara took his under 7's side to Penrhos 3G on Sunday also.  He commented:  "We started the first two games a bit slow but after that we found our feet and we played some excellent football, getting a win in both our final games. The boys did really well and kept going."

League organised fixtures returned this weekend for our Mini section but only our under 10's were in Saturday action, welcoming Burry Port to Llan Park.

This was yet another close encounter but by our own doing. The boys were in control of the ball and were displaying great one/two touch football up to midway through the 2nd quarter, letting their intensity drop for 15 minutes before picking back up in quarters 3 and them 4.

Coach, Chris Meredith commented "We couldn't be more proud of the boys and the way they choose to play the game.  It's clear that their hard work and commitment to training is starting to pay off and we look forward to seeing how they can develop further."

Our under 12's hosted Ammanford at the Park.  In a close contest, the visitors emerged with a 5-3 victory.  Llan lost the 1st half but an improved performance then won the 2nd half.  Coach, Justin Williams praised the overall performance and the way that his team passed the ball.  The difference was probably in the finishing with Ammanford being more clinical on the day.  "Steff, our keeper, was man of match," Justin said.

With a late postponement for the first team due to our opposition cancelling, it was a last minute dash to organise an intra club friendly for the seniors at the park.  Four of our oldest under 16 players joined up with the adult squad to complete the line-ups and impressed their new team mates.

It is a huge shame that supporters were unable to watch at Llangennech Recreation Ground as they would have been entertained by some spectacular goals particularly from Eray Wilson and Tom Harris.