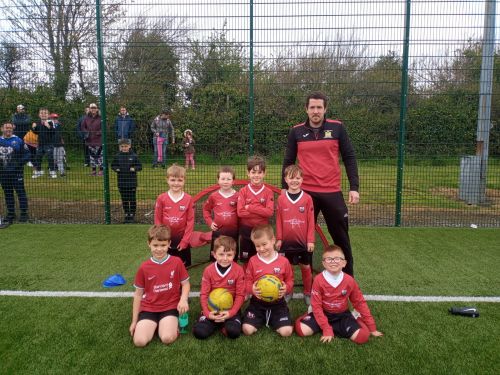 Our U7's played in another festival style competition at Coleg Sir Gar on Sunday. Eight players took to the field and impressed the coaches and parents that watched on.

Here's what the coaches, Mike and Kylie had to say:

Mike. "The boys were excellent today. They scored some great team goals and were brilliant defensively. Can't wait until next week to see what they do next."

Kylie. "It was nice to see the boys bouncing back so enthusiastically after being disappointed with their results last week. They played much better as a team instead of individually. Hope they keep it up."

A difficult game this weekend for our U10's, against what is a very accomplished Seaside side.

We played 4 quarters, each lasting 20 minutes, in the pouring rain, and when the energy levels and effort were there, we gave them a contest unlike previous games against them. Credit to the boys for never giving up and letting their heads drop in difficult conditions.

Even against strong opposition, the team tried to impose their own style on the game and the opportunities worked showed the qualities they have.

Coach Dan Price said, "with the players feeling they lost this game, as is understandable despite this not being the aim of Mini football, the team spirit that is growing amongst the boys makes me incredibly proud to be their coach. Nevermore so than when Bob scored his first goal for the club, showcasing some excellent individual skill that is far too often hidden behind low confidence, that resulted in mass celebration from his teammates and parents alike"

Our U11's went away to Camford on Saturday.

Coach Curtis Roberts was impressed with his side's performance, "It was an excellent performance from the boys and it's great to see them using the skills they've learnt in training."

Curtis also picked out Harlyn's individual performance as his man of the match after his impressive performance.

Everyone involved can be proud of themselves after this weekend's performance, with some superb passing moves leading to outstanding team goals.

Our U12's also went to Camford but were unfortunate to find themselves on the wrong end of the result, losing 3-0.

Coach, Justin and his assistant, Jim were both impressed by the performance, "This was our best performance so far this season. We are proud of their performance against the top team in the league and hopefully, we can maintain those standards for the remainder of the season."

Llangennech did everything but score in the match as Daniel P, Ollie B and Noah J caused the Camford defence problems throughout the game.

Cai D's performance in midfield was outstanding, defending, attacking and threading balls through from midfield to the strikers.

Then the defence was outstanding Jack W, Ronnie G, Dylan E and Cai G all putting in goal-saving tackles. While Tom H put his team first by stepping up last minute to play in goals and made some excellent saves!

A Friday night football special saw the U16's of Llangennech and Bancffosfelen share the spoils in a ten-goal thriller!

Coach, Chris Evans said, "It was a great effort considering the circumstances. We had a bare 11 on a warm night and it was our first game since December, but the boys dug deep and managed to get a positive result even after going down in the match too. It's really pleasing to see."

Llangennech's bare-11 went 4-2 down in the match before fighting back to take the lead at 5-4. An unfortunate deflection saw Banc equalise late on in a dramatic encounter.