The club’s newly established walking football team have seen an increased number of players at their weekly sessions. This photo from last night’s session shows the lads having fun in numbers and no less than 27 different players have turned out at some point for a kickabout since it launched at the end of April. 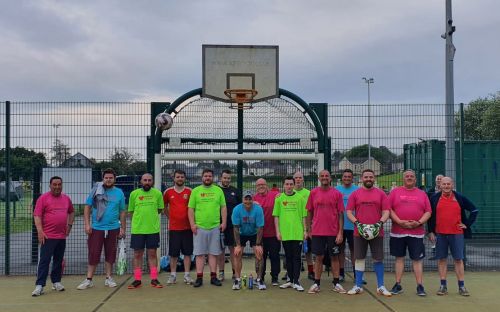 The squad meets at Hendy astroturf from 7-8pm on a Wednesday. “It’s been a great response since we launched under Llangennech Football Club and we are thoroughly enjoying it. We’ve even had a visit from the chairman of the Wales Walking Football Foundation, which was great” says organiser Brian Mcauley.

The self-styled “Walking Heart Attacks” are looking to boost their number of over 50s players and, with a growing number of clubs around the area, may consider some friendly matches against other over 50s sides if they can get numbers up.

Llangennech AFC chairman Emyr Williams said, “It’s fantastic to see the enthusiasm within our community for being active and the addition of the walking football team to the already established Veterans team we have makes the club very proud to be able to provide the platform for an older generation to continue to enjoy being active to whatever degree that may be and having fun with it.”

Or if you’re interested in a runout with the club’s Veterans football team - the “Llan Pops” - or if you’re keen to get involved with the club in any capacity, then contact us via email:
Committee@llangennechafc.org