Competitive football returned for our junior sides on the weekend and two girls teams represented the club while two senior matches took place on Friday night. 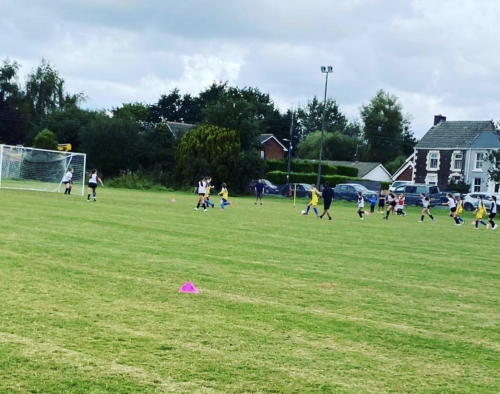 The seconds hosted Camford Reserves on Friday night at the Llan Siro. An early top of the table clash as both sides came into the match undefeated, with Llangennech leading the way having won all four of their previous matches.

But Llangennech got off to a nightmare start, conceding inside 10 seconds after a mix-up at the back which led to Camford striker, Daniel Brown converting the easiest of chances. After the poor start, Llangennech bounced back, a dominant first-half display was rewarded on the 29th minute as Lewis Williams’ pass found Liam Fry who slotted home the equaliser.

Getting back on level terms before half-time, Llangennech were hoping to continue their dominant spell into the second half but couldn’t reach the same levels early on. Another awkward moment for keeper, Martin Williams saw him bring down the Camford striker in the box in the 52nd minute. A penalty that Josh Finan converted for the visitors. Chris Evans’ side showed resilience, though and worked their way back into the game again. Creating plenty of chances in the second half before Peter Watts was fouled in the box and Nathan Mcauley levelled from the spot. Despite more pressure late on, Llan were unable to find the winner and will look to strike revenge on Saturday as the two teams meet again.

Reserves boss, Chris Evans said, “We knew it would be a difficult game against a Camford team who were happy to defend in numbers and try to hit us on the break for the most part.

“Despite falling behind twice, the character, attitude and work rate we’ve shown in every game so far this season got us back on terms and we were unfortunate not to get the win in the end given the chances we created particularly in the second half.

Llan’s third senior team played their second league match in four days as they travelled away to face Burry Port ‘A’ in CAFL Reserve Division 3.

A large and hostile home crowd and an early kick-off resulted in a slow start for Llan that led to a goal for the home side as the Llan defence failed to settle quickly and were caught out by some route one play.

Llan eventually settled into their typical pattern of play but a narrow field ensured that Burry Port were able to maintain a physicality to proceedings, to their advantage. Despite this, Llan managed to get a foothold in the game and despite losing 3 players to injury by half-time, had taken a 2-1 lead through goals by centre back O’Mara and Lewis Davies.

The change of personnel gave the home team a different problem to deal with. With lots of pace and movement allowing Llan to dominate large parts of the second half. First club goals for debutant Jamie Davies with a poacher’s goal, wingers James Henderson and 16-year-old Rhydian Soady-Jackson (header) put Llan in full control against a tiring home team. Tom Pulling capped a good all-round 2nd half display with a 25-yard effort that flew into the top corner to complete a deserved win to maintain the 3rd team’s unbeaten start to life.

Next up will be a tough encounter away at top of the table Bwlch Rangers to try and become the first team in 9 attempts to take some points from the league leaders.

The U14’s scheduled match against Johnstown was postponed on the weekend. They will begin their season away at Burry Port this Saturday.

A very good performance by the Llangennech team saw them just slip to defeat to a strong Ammanford team at the weekend, losing 2-1.

All three goals came in an eventful first half where Ammanford were awarded a controversial penalty, denying Llangennech a point. Daniel scored Llangennech’s goal.

Llangennech coach Justin Williams was more than happy with the performance but knows that next week will be the toughest game of the season against Carmarthen Stars and hopes the boys will be more than up for it.

The U12’s kicked the season off with high scoring game with Pontarddulais.

Having gone 7-0 up half time, the boys took the foot off the gas and Bont took advantage with 3 goals in 3 minutes!

Settling back into their rhythm, Llan came out 11-7 with hat ricks from Rhys McCauley and Mason Grey. Steff Roberts with 2 excellent finishes to set us on the road to victory in the first-half.

Coach, Curtis Roberts said, “Keep playing football and the hard work is showing, hopefully, we can keep it up next week with another tough home game against Seaside at the Llan Siro.

U8’s and U12’s played their first matches this weekend and what a great start! After a good few months of hard work and training, it was finally great to see them putting what they’ve learnt into practice.

10 of our U8’s went over to Neath and played 3 games on Sunday morning and what fun! After shaking off the initial nerves and stage fright the girls played some lovely football with a few goals too! Everyone had fun and showed great team spirit which is what it is all about and they can’t wait for next time!

U12’s Girls Development had their first match at home at Llangennech Park.  The girls showed strength and courage and fought through the nerves, you wouldn’t have thought it was their first game with a great performance against a strong and experienced Camford team. We look forward to our next game v Johnstown FC away on Sunday.

The U10’s also have a big weekend ahead with them finally kicking off their games in the WWWGL this Sunday with a mini’s festival over in Swansea.

If more girls want to get involved, please contact Katie by email at girls@llangennechafc.org

The U10’s boys went to Penrhos to play against Evans & Williams in a friendly.

A good performance by the team saw really food defensive football despite coming up against a strong Albies side.

Coach, Charlie said, “We now know where and how to improve, and we’ve seen the level we want to be at.

The U7’s took part in a mini-festival at Coleg Sir Gar, hosted by Evans & Williams.

A group of 8 players split into 2 teams and took part in small side development games. Each team played 4 games, including some debuts for Llangennech players.

Both teams showed great teamwork, passing and dribbling, with great attacking and defending across the pitch.