The firsts return to action against Abergwili, the seconds travel to Camford in a repeat of last Friday’s fixture and the ‘A’ team travel to league leaders, Bwlch. While our U10’s girls will play for the first time! 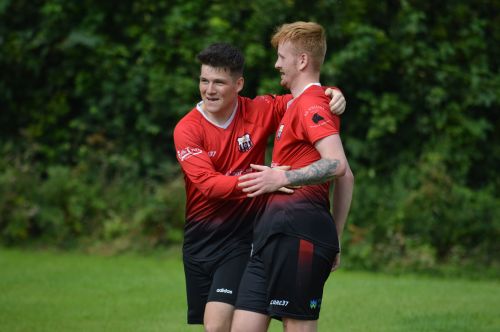 The first team return to action after two weeks without a game. Last time out was a disappointing defeat at the hands of Pwll who came out 3-2 winners at the Llan Siro. All five goals came in an eventful first half where Gavin Williams and David Thomas netted for Llan.

Nathan Mcauley will be hoping for an improved result this week after two defeats in the last two games. This week’s opponents, Abergwili, come into this one in similar form having also lost their two most recent games. Both sides will be looking to use this fixture as a chance to return to winning ways.

Llangennech currently occupy 7th place in Division 1, while Abergwili are second from bottom, in 12th. Nathan Mcauley has named a 14-man squad for the early kick-off at the Llan Siro on Saturday. 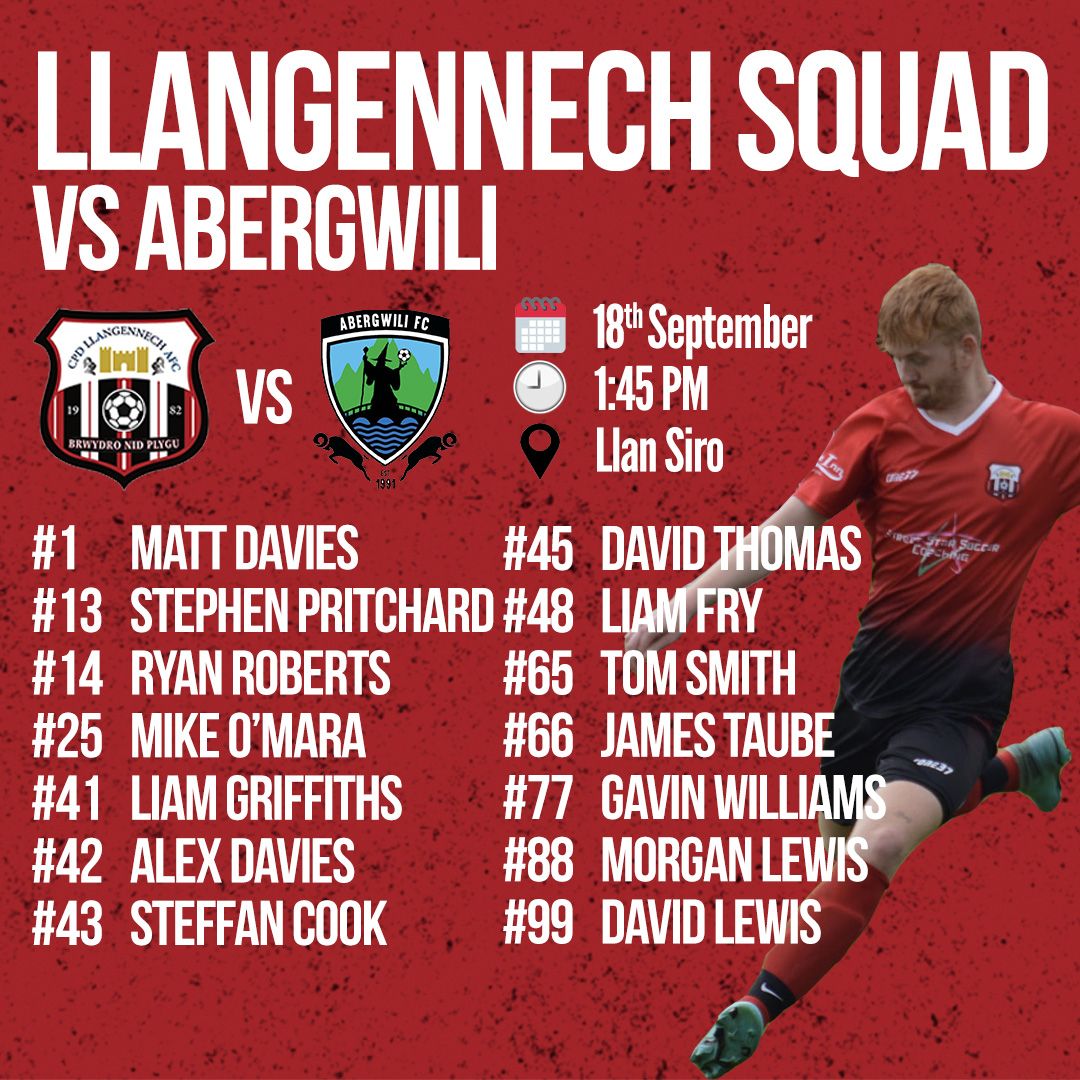 A repeat of last week’s top of the table clash which ended level, as both Camford and Llan face off for the second time in succession. (Watch highlights of last week’s fixture here)

Llangennech were left frustrated on Friday night after failing to pick up all three points against 2nd placed Camford. Although the team did manage to maintain their unbeaten start after coming back from behind twice to salvage a 2-2 draw. Reserves boss, Chris Evans, summed up the match by saying, “We knew it would be a difficult game against a Camford team who were happy to defend in numbers and try to hit us on the break for the most part.

The sides meet once more tomorrow as the reserves will be looking to come out on top against a Camford side who sit just two points behind them after five games each. Chris Evans has named a 14-man squad for the top of the table clash. 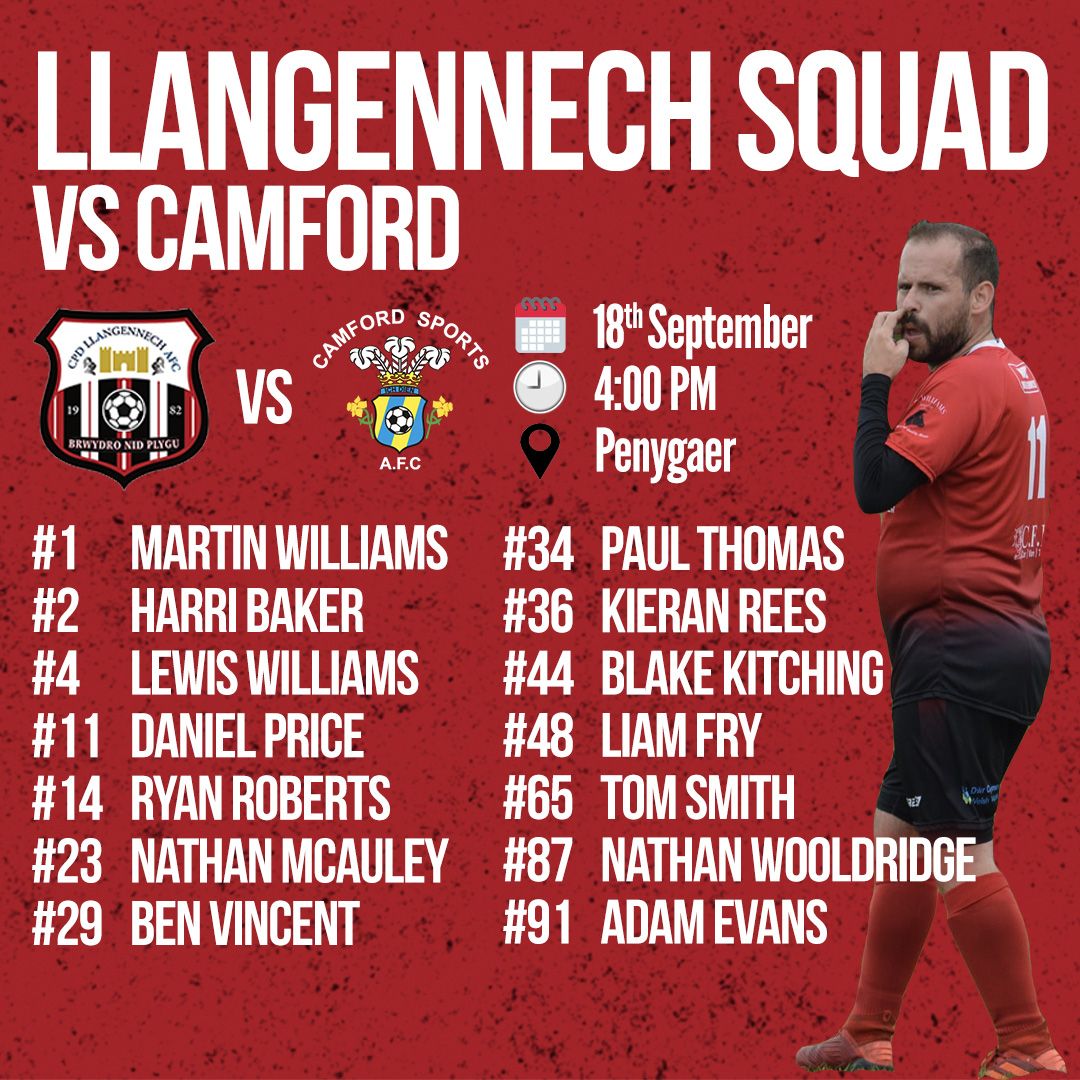 Llangennech’s third senior team will face their toughest challenge yet as they take on a Bwlch side that are yet to drop a point after eight matches.

Llangennech ‘A’ come into the fixture in good form after a solid start to the season, without a defeat in their first three games. A draw on the opening day against FC Carmarthen has been followed by two convincing victories against both Pontarddulais ‘B’ and Burry Port ‘A’.

However, ‘A’ team boss, Emyr Williams knows that tomorrow will be a tough task with free-scoring Bwlch, topping the league with some convincing victories of their own in their eight games. Scoring 62 goals across the fixtures!

Emyr Williams has named a strong 14-man squad for the clash with the league leaders.

Our U14’s are set to begin their season with a trip to Burry Port this weekend after last week’s scheduled fixture was postponed. While our U12’s boys are also in action against Seaside at home after their thrilling 11-7 win against Bont Ravens on the opening day.

The U12’s girls will feature again this week as they will take on Johnstown away on Sunday at Midday. While the U10’s girls will play their first minis festival this Sunday at Penyrheol, beginning at 9:00AM.

Finally, our U8’s and U7’s will feature in minis festivals at Coleg Sir Gar on Sunday morning.