The first team picked up an important three points against Tumble at the weekend as well as the 'A' team who beat Pwll, while eleven sides represented Llan! 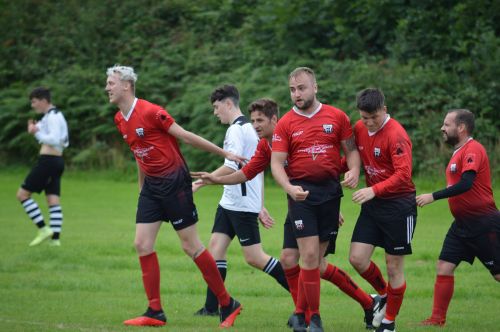 The first team returned to winning ways with a dominant 6-2 win over Tumble on Saturday at the Llan Siro.

Mcauley felt changes were needed to be made from the previous week and the starting lineup consisted of two 16-year-old players and our new signing Calum Morgan.

Llan started quickly with James Taube scoring an early free-kick with some good initiative to catch the keeper off guard. Taube soon doubled Llan's lead and his tally with a great finish cutting inside and finishing in the bottom corner.

Tumble then settled and started to put a little pressure on, scoring themselves from a deep free-kick which dropped inside the box and struck past the Llan defence.

Llangennech responded well with some great work from Tom Harries and Calum Morgan down the right, with the third goal following shortly after, when 16-year-old Blake Kitching won a challenge in midfield and set Alex Davies through. Davies then slotted neatly from outside the area to give Llan a 2 goal cushion going into halftime.

The second half saw Llangennech score within 5 minutes of the whistle with Liam Griffiths bagging himself a goal with a great finish assisted by Alex Davies.

Tumble managed another goal to make it 4-2 but the home team continued to dominate and it wasn’t long after when Griffiths got his second to make the score 5-2. Our other 16-year-old Ryan Roberts made an outside run and was played in by Alex Davies landing him with a great left foot Strike to make it 6-2. In the final 10 minutes, Llangennech could have scored another 2/3 more but were denied by the woodwork and the keeper pulled off some good saves.

Nathan Mcauley spoke after the game, "Happy with the Result, it was a good team display which we seemed to have lacked in previous weeks. It was also good to see both youth players step up for the senior team and both deserved that opportunity putting on an excellent, strong performance. Some fresh faces made a positive impact with Ross and Tom's return to the lineup. New signing,  Calum Morgan’s energy and work rate gave a much-needed lift to the squad. All in all, a very pleasing game which we look to carry into the West Wales cup next weekend.

The second team were beaten for the first time this season as Dafen leap-frogged Llan to go to the top of the league.

It was very much a game of two halves against a strong, organised Dafen side.

Llan bounced back well from conceding an early penalty to lead at the break, after a brace from the first-team boss, Nathan Mcauley.

The performance and work rate really dropped off in the second half and Llan couldn’t get their usual passing game going.

Llangennech’s A team returned to winning ways with a dominant 4-0 win over Pwll on Saturday at their home fixture in Penygaer.

With just 12 players available on the day, there was a season debut for Rhys Davies and a first-ever senior game for 16-year-old Leeroy Bakasa.

Early pressure from Llan led to a deserved penalty awarded and converted confidently by Jamie Davies. Soon after there was another which Davies duly converted.

Bakasa was let loose and terrorised the defence with his pace and ball control setting up Justin Williams with a sublime finish to make it 3-0 by half-time.

The second half continued to see more of the same with Llan’s dominance built on a solid defensive effort and great communication and work rate - many of the same players having learned much from the previous week’s drubbing at Bwlch. Pwll had a spell of pressure early in the second half but Llan negotiated the situation well and despite keeper, Martin Williams having had a quiet day, he was forced into pulling off a superb double save from point-blank range to deny Pwll a goal.

Renewed pressure and good football led to Centre forward Adam Evans popping up with a trademark long-distance finish to make it 4-0 and the side saw out the game comfortably with a number of chances created and probably should have been converted.

However, it was a fine performance and another 3 points to get the season back on track swiftly ahead of next week’s trip to Drefach.

Llan U14s played their first game of the season. Having lost eight or nine players over the summer and wondering if the team had a future, with 12 players available on the day.

New centre back Owen arrived to play without having met most of the team. To say he was nervous was an understatement.

What followed was a demonstration of team spirit and commitment that makes me positive for the rest of the season, mixed with some lovely football.

We started okay, but a couple of mistakes let them in for a penalty early on and a couple more mistakes put us 4-0 down. Not one head had dropped though and effort was top notch.

During this time we had created chances including one that squirmed towards the line before it was retrieved by the keeper.

A minute before half time we created another chance and Leon fired in our first goal of the season.

We came out and dominated the opening 10-15 minutes creating numerous chances and scoring 2 more goals (Owain and Leon) to make it 3-4.

Sadly our comeback was not to be and you could see the effect of not having played the 8 or 9 games that Loughor had already played in our tiredness towards the end.

Coach Jimmy said, "The score did not reflect the performance for me. We will be sharper and fitter in a few weeks and I believe we can compete with anyone in this division. Not a single player could be faulted for commitment.

The Under 13's travelled to Kidwelly and lost 4-3 in a tough battle.

In a game of two halves, Llangennech failed to get any consistency in the first half and were trailing 2-0 by half-time.

However, a much improved second half saw therm score 3 goals but still going down by four goals to three.

Reagan scored on his debut along with Tom H and Daniel.

Coach Justin chose Gethin T as his man of the match as was outstanding throughout the game.

The under 12's fell to a heavy defeat against a strong Camford side.

Not too many plus points after a convincing win for Camford.

But with a bare 9 due to covid, Llangennech battled on.

Coach Curtis said, "The never say die attitude was most pleasing and stuck together throughout the match which showed the team ethic they demonstrate on a weekly basis

It was great to see our U8’s out again this weekend for their second experience of matches. This week we had 2 teams playing which was great to see! Fewer nerves this time and thoroughly enjoying the experience.

The U12’s were home to a very established Cwm Wanderers and despite the tough game, the girls are showing signs of progression and development each week displaying some excellent football.

Both teams went out in their brand new kits looking very smart and feeling the part! Thank you to our sponsors, Trish Taxi’s, Rosebowl Florist, The Castle Inn Llangennech, BSC Limited and MCL for supporting us and making this happen!

U10’s are the only team to play this coming weekend with their minis festival at Coleg Sir Gar at 9am on Sunday Morning. They will also be making their first appearance in their new kit.

The U11s played their first games in the new Llanelli Mini League Football Festivals, like all Mini's.

Unfortunately, we were low on numbers, resulting in 2 teams of 6 players playing in a 7 aside arrangement. A couple of our opponents dropped to 6 but some remained at 7, a challenge our boys took in their stride.

Both teams should be incredibly proud of their efforts and the way they tried to play football the right way. When under pressure against the teams with 7 players, the work rate was exemplary and the ability to get on top of those games for large spells was something special.

The under 8's features in a mini-festival at Coleg Sir Gar in the new Llanelli Mini League Football Festivals.

The boys enjoyed the new set-up at Coleg Sir Gar with the bigger pitch and goals suiting their play.

They took a lot of what we have been trying to do in training created a lot of chances and scored some very nice goals and also defending well at the other end.

The U7's took part in football festivals at pwll, with a total of 12 players involved in making up three teams for Llan. All playing 3 games each.

All teams played really well, with great performances and what they have been working on in training starting to show in the matches with all teams passing more and spreading out and trying to create space.

A special mention to Felix also who missed this weekend with under 7s to play to help the under 8s.