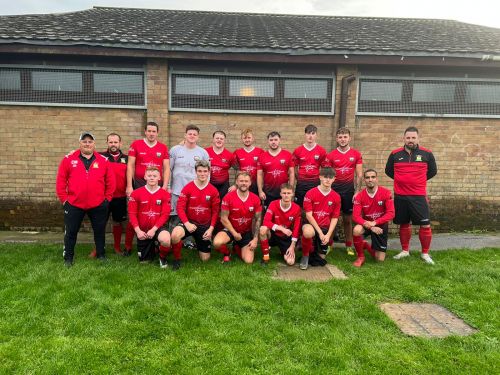 Llangennech welcomed Premier outfit Llandarcy to Penygaer Playing Fields on Saturday in the first round of the West Wales Cup.

It was a fairly tight first 10 minutes for both teams until Llangennech’s left-back Ryan Roberts opened the scoring to make it 1-0. Shortly after and striking from outside the area Alex Davies doubled the lead giving the home team full control up until half-time.

In the second half, Llangennech continued to pressure Llandarcy which led to Callum Morgan lobbing the Goalkeeper for 3-0.

Flying Llangennech didn’t stop there with Tom Smith scoring the 4th with another great strike from outside the area.

With Llangennech leading 4-0, Llandarcy needed to dig deep to have any hopes of a return and in the next 10 minutes put the pressure and managed to score 2 quick goals to make it 4-2 with 10 minutes to go.

Llangennech’s character and determination dented any hopes for Llandarcy when Ryan Roberts tapped home for his brace making the final score for the underdogs 5-2.

Manager Nathan Mcauley was thoroughly impressed at the team's performance and described it as the best performance by far of the season.

"We showed total grit and team camaraderie in a tough game! The boys wanted it and went for it from the get-go. It sets the bar high for our away trip to Llandovery this coming Saturday.

It was a game of few chances and despite controlling possession in the early stages, we became guilty of overplaying in defensive areas and trying to force play in the final third against a well organised and resolute Loughor side who capitalised on our mistakes. Plenty of effort on display so hopefully we will learn from it and get back to winning ways this weekend.

The A Team played for the first time in history at the Llan Siro at Llan park on Saturday. A strong side was fielded, a mix of experience and youth, and the team settled early against a strong and fit Llandeilo outfit.

Some impressive link-up play between Ethan Daniels, Liam Williams and Leeroy Basaka down the right-hand side led to some dominance in that area which they continued to exploit, eventually leading to a first senior goal for Basaka, following an impressive debut against Pwll two weeks ago. Rhydian Soady-Jackson assisting during an industrious first 15 minutes in his role as the number 10.

This joy continued as centre forward, Adam Evans converted a trademark finish after a lay off from the left-wing James Henderson on 28mins. Basaka was sharpest to get on to the end of a clever through ball from the energetic Jimmy Beckett to put the home side comfortably ahead on 35 mins.

Some late first-half pressure led to an unfortunate hand ball inside the box and Llandeilo duly converted the penalty on the stroke of half-time. 3-1.

“More of the same” was the message from management during half-time, and that the next goal was crucial. Llandeilo, with their tails up following the late first-half rally, were first to strike and a superb 20 yard half volley from Llandeilo captain Steffan Evans found the net to make it 3-2.

A period of some composed play at the back and dictated by Beckett settled Llan’s rhythm and soon enough the danger in the final third returned. Henderson cut back onto his right foot with a sweet finish to the bottom corner, leaving the keeper no chance.

Llandeilo tired quickly thereafter with Llan dominating the final exchanges while bringing on fresh legs - a deserved goal for Beckett, assisted by his midfield partner Williams, with Basaka completing his hattrick on 86 minutes with an accurate finish from a left-sided cross to finish off a 6-2 win.

Assistant Manager Aled Davies said after “We couldn’t fault the attitude today against a decent looking Llandeilo team. The lads will take great confidence from that performance and we look forward to a busy 3 weeks ahead, starting hopefully by banking some more points against Caerbryn next week.” 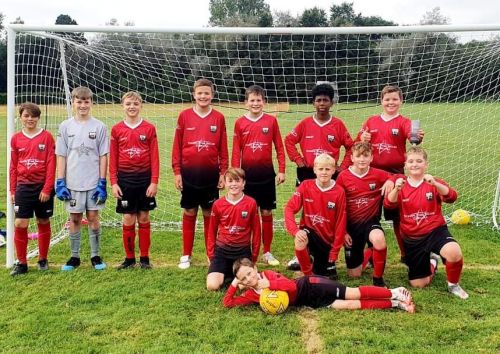 What a difference a week can make! Llangennech turned a 7-0 defeat last week into a 5-1 win this week!

Llangennech were back to full strength and the result showed that. Daniel P, Ollie B, Kai G and Noah J all got themselves on the scoresheet.

Llangennech played some wonderful football and were defensively solid. Stopped any attempts of attack from the Evans & Williams forwards as llangennech showed their class.

New boy Joe P was again excellent, doing all that was asked of him

Coaches Justin and Jim were delighted with the llangennech performance!

Numbers restricted the team to only 1 side this weekend, playing in the earlier session and having 2 subs. All players put in plenty of effort but took some time to find their rhythm. Come the 3rd game, they were playing well and the link-up between players was excellent.

One parent commented on the team what's app group that the boys "played really well in that last game, with good passing and loads of chances to score. It's a game full of positives. Well done boys". Always good to hear the praise and encouragement come from parents, as well as coaches.

A busy Sunday full of football for the girls!

We had 30 girls between U8’s & U10’s out playing at the weekend in their minis festivals in the West Wales Women's & Girls League flying the flag for Llangennech AFC and doing the club proud! Amazing effort by all and each one thoroughly enjoying the opportunity to play!

Sunday afternoon our U12’s development side had an extra special training session on their free week lead by Seniors manager and coach Nathan Mcauley who worked on positioning. The girls were fantastic and thoroughly enjoyed! It was great to see such a good turn out on a sunny Sunday afternoon!

Next week U12’s return to action with Ystradgynlais home at Llangennech Park with a 12.30pm KO.

Whilst under 10’s go to Coleg Sir Gar for their Minis Festival with an early start of 9am KO!

For more information on our girls' teams and training please contact Katie by email girls@llangennechafc.org

With the U10's playing in the festival style football in the Llanelli Mini League, it was great to see such good performances and fight between the players despite being short on numbers.

Some outstanding football was played, including an outrageous goal from Jack, lobbing the keeper from near the half way line!

Coach Charlie was pleased with the performances and said, "Everyone was amazing today!"

The U8's boys also featured in the festival style football in the Llanelli Mini League.

The boys were excellent in every game they played.

Coach Mike said, "They are progressing very well and it's great to see."

The U7's went to Pwll to play in the Llanelli Mini League.

With enough players to split into two teams, it was great to once again see some great teamwork, with great passing and dribbling skills.

Well done to all involved!