In 2018/19 Llangennech AFC ran a veterans-type team for the first time.

Initially called “Llan O36”, the concept appeared self-explanatory... but it was not just aimed at over 36 in age. The premise was that it’d be open to many of Llan’s “less-used” and "more rounded" footballers, over 36 waist in size too. A call to all "Llan AFC Legends"; past & current players, or any veterans within the village who fitted the bill and may fancy a run out.

We look to get friendly fixtures against like-minded sides - either veterans or works teams, invitation/charity sides, maybe the odd 5-a-side squad who fancy a run out as an XI, etc. The plan would be primarily to play games on a Sunday afternoon then back to HQ at the Castle Inn for a few social pints and maybe watch the Sky Super Sunday game!

"Llan Pops" played their first match against Gorseinon Vets away at Parc-y-Werin on 30th September 2018; after putting in a good performance, with Goalkeeper Neil Bryant putting in a man-of-the-match performance, eventually Llan conceded goals in the 89th and 90th minutes to lose 2-0! Gutted! But history was made! 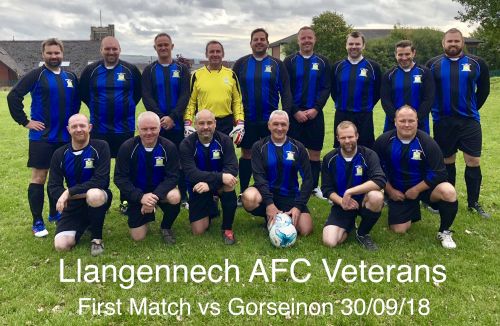 2018/2019 season ended having played 5 games but the Llan Pops were well and truly off the ground! With over 25 players ranging from ages 36 to 55 turning out, Llan Pops will forever be trend setters as other local clubs such as Seaside and Albies will follow suit next season. Veteran Goalkeeper Neil Bryant, 48, was still turning in man of the match performances for the first team as well as playing for the Swansea over 45s team. This led to an eventual Wales 40s call up and Neil represented Wales in February 2019, Llan's first serving International!

2019/2020 saw another few games against like minded opposition including Birchgrove Colts, Swansea City 50s, and new local rivals - Albies! The side recorded their first ever victory away to Birchgorve with a 4-2 win! A Wayne "Coco" Phillips hatrick and with Christian "Blocker" Williams on the score sheet, with the latter regisetring an own goal also! Covid-19 put paid to scheduled fixtures at Waunarlwydd and the Seaside Tournament.

Anyway, please let us know if you’d be up for it. Whether you think you still have what it takes to dust off the boots and show how it’s done at the Llan Siro; or you feel you’re too old or unfit or whatever but fancy getting involved for the fun and social side of it (telling everyone how good you used to be!).

You are all welcome!